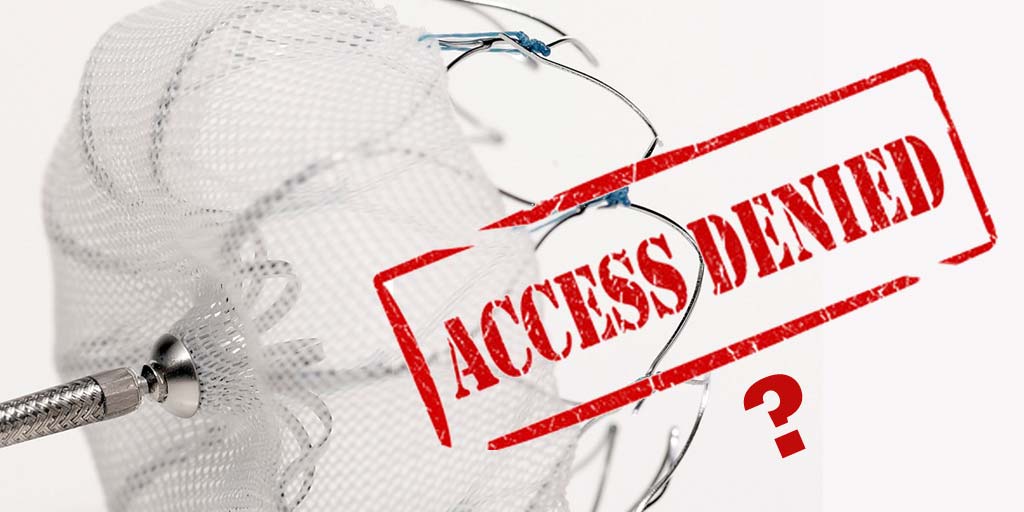 We even blind ourselves to bizarre behaviors. For example, when the FDA and its leaders give faulty dietary advice, perhaps even unwittingly spurring the obesity epidemic, we never think they (and the dollars that lobby them) are the problem.

We just think they are underfunded. So, we supply them more money. And, then, we end up with the Vioxx scandal.

You see, these are the things you need to know.

Because, I never previously did.

When it comes to the availability of your medical therapies, the FDA works in tandem with the Centers for Medicare and Medicaid Services (CMS). The FDA is the approver of medical stuff, and CMS, of course, is the largest payer for it.

I used to think my interests were at the center of it all.

In fact, this governmental tag-team wresting match of bureaucratic and political proportions is merely in the name of my health.

Let me tell you a story.

Atrial fibrillation is a condition that causes you to have an irregular heart beat. Lifetime risk for developing it is about 25%. This means that one in four people will likely get it at some point.

Atrial fibrillation results when the back chambers of your heart quiver instead of beat. By itself, it’s not life threatening. But, it does increase your risk of stroke. This is the major concern.

Contrary to other therapies that may be less helpful for the majority of people employing them, doing nothing to prevent stroke in patients with atrial fibrillation carries more risk.

For example, let’s assume you are a 75 year-old female. You take medication for diabetes and high blood pressure. 100 people similar to you are in the room. All have atrial fibrillation.

If left untreated, 10 of these people will have a stroke this year.

But, the 90 who survive stroke-free this year, return to the same room the following year.

In fact, after five years, over half the people in the original room will have had a stroke. Like I told you, doing nothing in atrial fibrillation carries consequences.

Now, let’s assume only two therapies exist in combatting your risk for stroke.

One therapy is a “blood-thinner.” We call it warfarin. Its brand name is Coumadin.

Coumadin is a good therapy in patients with atrial fibrillation. It prevents stroke. In fact, it statistically saves about 70% of the people who would have otherwise had a stroke in my example above.

Coumadin must be monitored closely with frequent blood tests. The medicine interacts with a myriad of other pills. Its absorption is highly influenced by the types of foods you eat. Dietary modifications are frequently required.

And, of course, with Coumadin, there is a risk of bleeding.

In my example above, for every 100 people in that room receiving Coumadin for one year, 3 will suffer a major bleeding episode. And, a similar frequency of major bleeds will happen again next year.

Moreover, if these 100 people happen to be individuals where the precise dose of Coumadin proves to be challenging to manage (we say these patients have a labile INR), the number of major bleeding episodes will double.

Essentially, because of Coumadin’s downsides, a new therapy exists.

It’s a device, not a medicine.

The new device is called the WATCHMAN™. It is implanted through a minimally invasive procedure requiring a small incision in your groin. The purpose of the WATCHMAN is to seal off an area inside of the heart where blood clots can form in patients with atrial fibrillation.

Think of it this way. There’s a chamber inside your heart that resembles the letter “Q.” That’s right. A circle with a little line poking out. The line is what we call the appendage. It’s the area where blood clots are prone to form in patients with atrial fibrillation because the velocity of blood is slowest there.

The WATCHMAN’s goal is to seal off this appendage. Turn the “Q” into a functional “O.” And, by doing so, reduce the risk of stroke and end the need for longterm Coumadin.

The data behind the WATCHMAN predominantly comes from two randomized clinical trials. Both trials compared the WATCHMAN to longterm Coumadin use in patients with atrial fibrillation at risk for stroke.

The first study found that stroke occurred numerically less frequently in patients receiving the WATCHMAN at a median follow up of 2.4 years. Obviously, this looked favorable for the device, especially since over 93% of the patients in the device group were then able to discontinue longterm Coumadin. However, this success was balanced by slightly more safety concerns (1.9% absolute increase overall) for the WATCHMAN group, almost all driven by a small number of adverse procedure-related events surrounding its implantation.

Based upon this trial, the FDA decided not to approve the device, citing more data was needed regarding its safety profile.

A second trial was subsequently performed. Event rates in this trial (a combined end-point of stroke, systemic embolism, and cardiovascular/unexplained death at 18-months) were similar (0.064 in the WATCHMAN group and 0.063 in the longterm Coumadin group) and expectedly low in both treatment arms. Procedure safety was improved compared to the first trial–a finding not too surprising as both device and skill of physician operator are usually expected to improve with time.

With this additional data, the FDA finally approved the WATCHMAN earlier this year.

Of course, in our heavyweight system of central authority control–one whose necessity is sold to the public under the guise of “quality” and “protection”–FDA approval for a therapy means little if CMS won’t pay for it.

So, round and round we go.

CMS actually issued a proposed decision memo stating that the device was not “reasonable and necessary” for treating illness. CMS came to this conclusion using the same data that I summarized to you above.

Feel free to read their lengthy memo, but basically, CMS feels the WATCHMAN should not be covered by Medicare unless costly bureaucratic barriers of Himalayan proportions are able to be overcome by your healthcare entity.

A final decision on CMS’s proposal is expected next year.

Two organizations. One approves without paying. One pays without approving.

And, ironically, in a society loudly preaching for “shared” medical decision making, both organizations exude more paternalism than any physician ever has, by absolutely deciding your own values for you!

Friends, I’m not telling you the WATCHMAN is for everyone. Other medications are also available that better Coumadin in many ways. You will need a good doctor to help you decide.

But, the WATCHMAN is reasonable.

IF FOR NO OTHER REAON THAN because its benefits are different.

You must undergo a procedure with risk involved. But, in return, you likely rid yourself of an inconvenient medicine with longterm bleeding concerns.

In fact, it’s probably time we revisited the faulty notion that all new medical therapies must be “superior” to old ones in order to be useful. Many intelligent doctors, believing they are dedicated to the “evidence,” even think this is true.

It’s just the only paradigm we’ve ever considered.

The truth is that the WATCHMAN discussion isn’t about non-inferiority or superiority. It’s about a tradeoff of benefits in the setting of a few generalizable and similar outcomes.

As for the real problem?

It’s our acceptance of a paternalistic system comprised of CMS leaders attempting to do the unfathomable: assign their cost to certain tradeoffs they have deemed valuable to you.

As for the final result?

A boondoggle price-fix which ultimately does what the market would never do: make healthcare unaffordable to anyone outside of the government’s lavishly spending paternalistic umbrella.

There are no two ways about it. If you want prices to reflect value, there’s no good solution that involves CMS fixing them. In fact, healthcare costs would plummet in an environment where the government (and its lobbying influences) didn’t decide upon them and then fund them.

How much is the WATCHMAN really worth? How much would you be willing to pay in order to avoid the inconveniences of Coumadin? What procedural risks might you assume? Would there suddenly be a premium on taking Coumadin or avoiding it?

I’m not sure we will never know.

Instead, we will continue to guess at whether all things unaffordable arising from medical research and development are actually for our benefit or someone else’s.