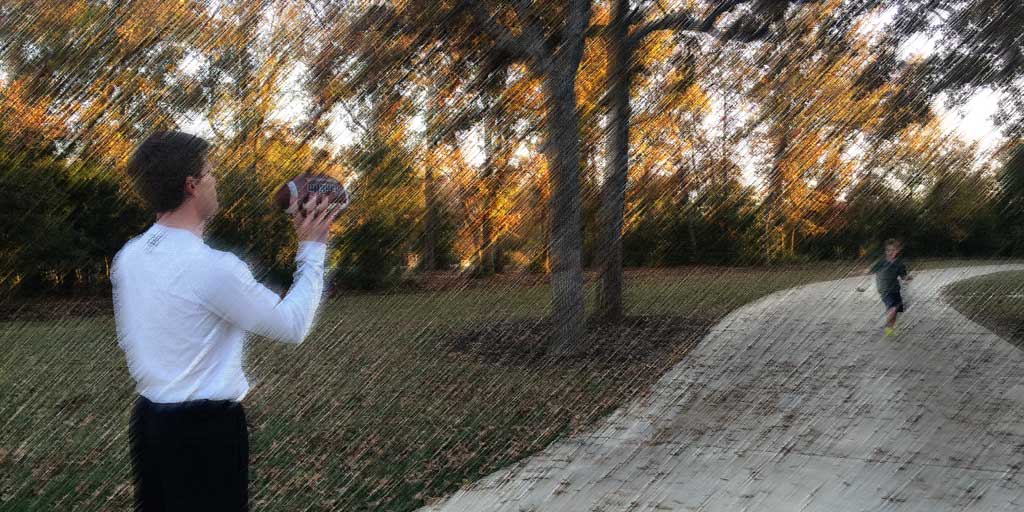 I told my son that my father and I played catch every halftime of every game we watched together when I was a kid. My son became interested. We went outside.

Our driveway is long in length. It is partitioned into segments by thin crossboards spaced about 12-feet apart.

And, so it begun.

We started with one segment of concrete between us. We called it One.

I threw him the ball. He caught it. I tossed it again. We continued for a while. We stopped for a moment to talk about how to grip the football. We started throwing again.

I backed up 12 more feet. Two sections of concrete between us. We started throwing the ball again.

Talent scouts might say my son is unlikely to be a football player. He didn’t even play his first team sport (T-ball) until last year. He seems more adept at memorizing the scores of the games than playing them. In fact, my son can still tell you the final score of last year’s NCAA Men’s Basketball Championship. If you can’t remember the two teams who played, just ask my son. He knows that, too.

Regardless, we kept throwing. It was beginning to get dark now.

We completed Three and Four without much difficulty. Five and Six proved to be challenging, but we would eventually master those distances, too.

Over two hours passed. We stopped once for Gatorade. Then, we went right back to throwing and catching. I asked my son if he wanted to stop and go inside.

“Let’s do Seven,” he answered.

By now, the distance was far enough that I had to throw the football underneath tree limbs spanning across the driveway. Seven tested my skill as much as his. About every other pass attempt I made would hit a limb, and I would have to throw it again. My arm was tiring.

I suggested we move to a different segment of the driveway, to an area less sheltered by trees. It would be easier there, I thought.

“But, Seven is right here, Daddy. I believe we can do Seven,” he said.

Quick calculations began in my own head. I would have thrown a football to my own father over three-quaters of a million times. Of course, that was over twenty years ago. Yet, at this moment, my tightening lower back and rotator cuff seemed to recall every one.

Finally, my best pass met with a rather unexpected catch. My son caught it from Seven!

I backed up again. And, I kept throwing.

The challenge from this distance far exceeded my son’s skill level on this day. A bystander passing by would have looked at me, and then my small son far down the driveway, and never would have guessed we were actually trying to complete the passes.

I threw another one. It hit him in the face. I ran a few steps in his direction, semi-expecting him to collapse on the ground in tears. He stopped me with his voice.

At this point, I wasn’t certain when enough should be enough. It was getting cold. The leather ball was stinging more upon impact. Darkness was limiting our eyesight.

Pondering the balance between awarding determination and making the judgment call that a prizefighter was done for the day, I listened as my son spoke again:

“I really think we can do Eight, Daddy. In fact, I know we can.”

My son has a mannerism where he will sway in place, shifting his weight back-and-forth from one leg to another when focusing on something. He’s done this since a very young age. He began to sway now. He flapped his arms back in forth momentarily, another one of his distinctive traits, as if to say I’ve got this.

I threw the ball one final time.

It spiraled in the air. It clipped the bottom of a tree branch, yet it still maintained its direction. It soared downward, colliding with my son’s forearms as he cradled it to his body. He looked up with a big smile.

That memorable day occurred a few weeks ago. There’s been a Rose Bowl since then. A Super Bowl awaits. But, I’ll tell you what. There will be no greater triumph. Only equivalent ones. For crying out loud, we did Eight!

24 hours later, I returned from a typical Monday at work. I pulled my truck into the garage like I always do. But, this time, as the garage door opened, I saw my son. He was standing there waiting on me. Holding a football.

“I’m ready for Nine!” he exclaimed.

Moving a little slower and a lot stiffer than the day before, I got out of my truck with a big smile. And, yes, it seems we’ve been playing catch nearly every day since then.

We are now up to Twelve. I had to put more air in the ball to get it to him. Soon, I’ll need to start lifting weights to better my own arm strength. My five year-old son joins us now, too. He just completed Four.

You see, my boys get real focused on those numbers. Twelve. Four. Seems that youthful minds crave concrete ways to define events. But, you and I know better. The only number that matters here is time spent on the target.