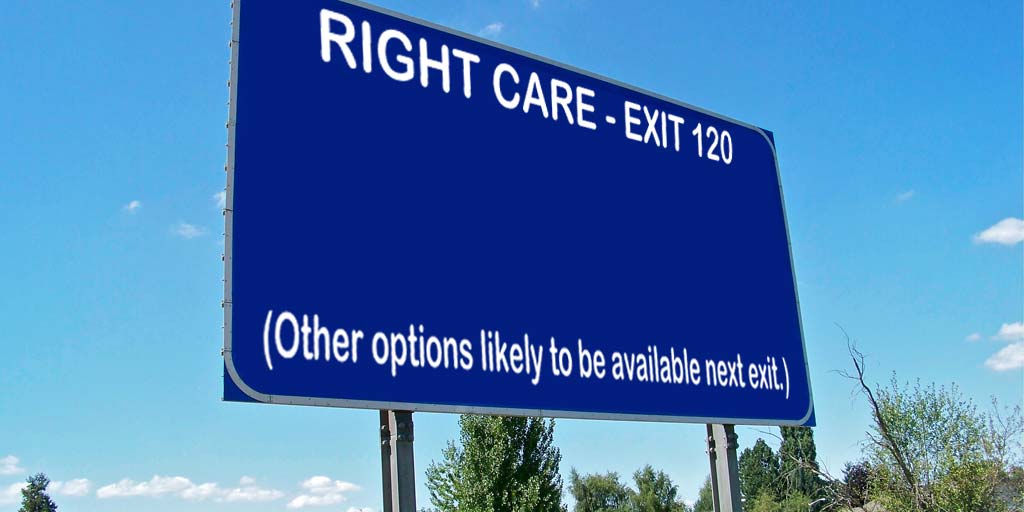 One of the more enjoyable writers I follow on social media is Dr. John M.

I’ve never met him personally. We only rarely exchange comments in the online environment. You know, 140 characters or less stuff. I don’t really know him.

I read his articles. Although I currently have no way of knowing this with absolute certainty, he seems to be very sincere. He may have me fooled. But, I don’t think so. He comes across as passionate about medicine, patients, and the physicians who care for them. He believes in doing the right thing.

He is an advocate for something known as RightCare. I’ll get to more about this in a minute.

Recently, Dr. John wrote a couple of articles that got my attention. One is about a procedure called carotid stenting, which treats blockages in the arteries of people’s necks. The other is about a heart valve procedure known as aortic valve replacement.

In the first article, Dr. John uses “data” to argue that carotid stenting in certain patents without symptoms provides no benefit.

In the second article, he disputes “data” favoring aortic valve replacement in certain patients who are symptom-free.

Two arguments. In many ways, taking opposite approaches–one in support of “data” as Dr. John interprets it, and the other against it. But, of course, his conclusion is the same in both cases: Less is More.

Most executives, many scientists, and almost all business school graduates believe that if you analyze data, this will give you new ideas. Unfortunately, this belief is totally wrong. The mind can only see what it is prepared to see.
–Edward de Bono

Now, don’t get too caught up in the medicine here. Dr. John’s arguments are reasonable. And, he knows that the real answer is about patient selection–basically to which patient you should apply what therapy. Precision medicine may ultimately help with this concept, but it’s still going to take some doing.

And, in the spirit of doing, it’s about time somebody said what many of us on the front lines of patient care have already been thinking for a while now:

“Less is More” has become a terrible mantra for Medicine.

There is just too much tension there.

For example, explain this to me.

How can you say “I’ve never been more frightened to order a test. Any test, even an echo, can get you on the runaway train”… and, then, you be supportive of innovative concepts that would add an echo to EVERYBODY’S routine physical exam, now that an echo can be performed using a SmartPhone at the bedside?

Dr. John already has. Like I said, he’s a reasonable guy. He knows the importance of balance. But, I’ll tell you a group who seems to have lost this concept. It’s called the RightCare Alliance.

The RightCare Alliance is an initiative of the Lown Institute. It claims to be about reducing “overuse, underuse, and misuse of medical tests and treatments.” Like patient safety organizations of late, this mission statement allows for essentially no disagreement. You can’t dispute goals like that.

But, there’s always a catch.

For example, I couldn’t find one topic from RightCare’s recent Action Week that related to underuse of a medical procedure. Not one. In fact, RightCare appears to be less about the right procedural care, and more about no procedural care.

Perhaps, they should just change their name.

Biases are rampant everywhere. I’ve written about many of them. And, the RightCare group has their own. My favorite angle is actually the one where someone says they don’t have an angle.

RightCare’s leadership has been outspoken in support of single-payer healthcare. You think creating fear toward anything business-related in medicine supports that agenda? In fact, one of RightCare’s self-stated goals is to “highlight the conflict between the healing culture and business culture.”

That’s right. RightCare is in the business of saying that business and productivity are the real problems with medicine. And, one of their solutions involves the government taking over healthcare’s entire culture–since adding more government policies in medicine will surely fix the other ones that have failed.

Don’t get me mixed up. I’m not insinuating politics has anything to do with Dr. John’s support of RightCare. I don’t even care if it does. For the record, assign me the protagonist viewpoint on single-payer healthcare, and I can make you a case. Remember, every side usually has a side.

But, if the argument from RightCare is really one of medical waste and how that relates to the business of healthcare, there are simpler solutions. Besides, going after the “philosophy” of business borders upon anti-American. Like we are living in a vacuum where “business” sucks the life out of us.

Larry Page, co-founder of Google, works daily to solve billion-person problems. Imagine saying to yourself each morning, “How can I help a billion people today?” And, then, you go put on your shoes.

Elon Musk (Paypal, Tesla, SpaceX), Richard Branson (Virgin Group), and Elizabeth Holmes (Theranos). They all do the same thing every day. With businesses.

The harsh reality is that if our government would quit excessively regulating electronic health records (EHR), innovative businesses would likely step forward and save this industry from ongoing embarrassment. Unfortunately, the Office of the National Coordinator for Health Information Technology (ONC) has erected almost as many barriers to enter the EHR market as currently exist for entry into “weapons of mass destruction.” And, thus, Dr. John and I will likely remain frustrated with products in the EHR arena unless we rid ourselves entirely of third-party payment.

But, my point here is that the problem is not business. In fact, without it, Dr. John and I wouldn’t have heart cath labs or electrophysiology labs. We wouldn’t have life-saving medical devices, at least not to the capacity that we have today. What we would have is the bark of a willow tree.

Likewise, despite noticeable dramatization to the contrary, RightCare’s core issue should not be with the physician workforce as a whole. Yes, behavior is influenced by a number of things, economics included. And, if we really cared about making marginal care vanish, I’ve already told you how to do it.

But, I’ve said this before, and I’ll say it again: 99% of the physicians I interact with daily are in it for the RightCare reasons. Maybe, I only speak for them. But, we are out there doing the right thing every day, in an often adversarial external environment that has been forced upon us.

In fact, here’s a business concept I wish RightCare would take to the bank:

When your only focus is to blindly pursue the 1%, you will soon wear out your welcome with the other 99%.

It’s DO THE RIGHT THING. In medicine, in business, in life.

We could even start taking back medicine.

In the News, Physician Businessmen and Businesswomen