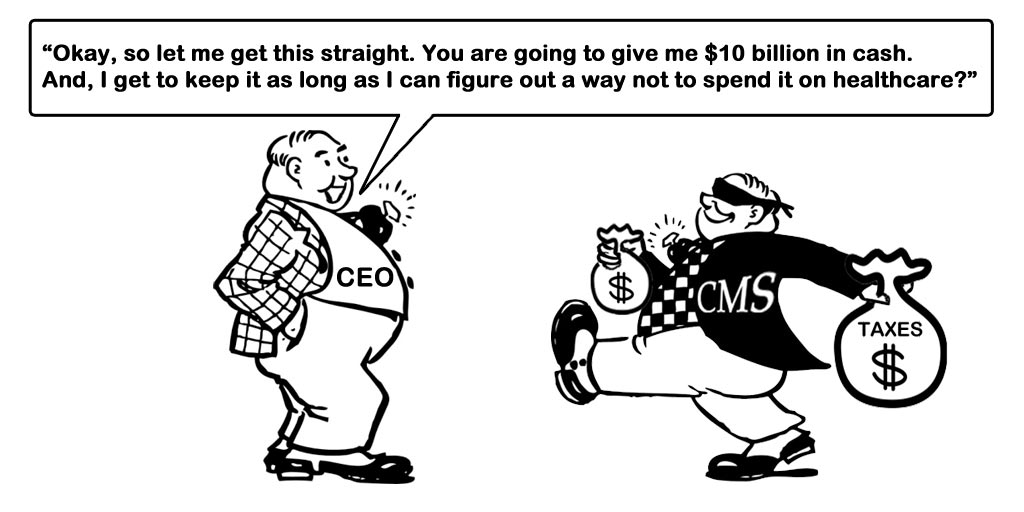 It is an alternative payment model. Our Health Department wants 50% of Medicare spending to be tied to It by the end of 2018. Recent legislation has further reinforced this.

Basically, here’s the scheme. The doctors and other people working inside It are supposed to behave as miniature insurance companies. Just provide care at the lowest cost, and It makes a profit.

I’ll say it another way.

Since meddling in the large health insurance market has resulted in less and less value for most Americans recently, the government figures that fragmenting insurance pools into smaller ACO insured groups will miraculously solve the crisis.

If you are having trouble following this logic, so is the government. Almost expecting It to fail, the government is heavily incentivizing the “market” so ACOs can exist.

Once again, this brings up the question, how much incentivizing does a good idea really need?

Many of the bureaucratic tanker ships we call healthcare systems have already bought into this ACO model. And, why not? You essentially get paid to be a healthcare monopoly. Suck patients into your system. Give them the appearance they should only seek medical care from you. Collect their money. Find a way not to spend it. And, you win.

Yes, you must document that your ACO is providing “quality” care to get the most funds. But, not to worry, It has a very expensive computer system designed specifically to check all those boxes for you.

THE LAW OF DIMINISHING RETURN

A buddy of mine is employed by an ACO institution. I am not. My buddy saw seven patients in clinic today. His schedule was full. I saw twenty. Just in the afternoon.

I don’t always see twenty in a half-day. It depends. I actually prefer to see less. But why twenty, today? To make more money?

This is where the ivory tower of apostles fighting capitalistic productivity have just lost their marbles. I saw twenty patients this afternoon because my phone at the office was ringing off the hook. People were having all kinds of problems. They needed to be seen. Today. And, my buddy? He had an opening in two months. His institution informs patients who need to be seen more “urgently” to go to the Emergency Department.

I’m not any smarter than him. I’m not a better doctor. But, I am more productive. My tugboat is better motivated to move that way.

But, the government has decided that tugboats must go. It is replacing them. And, the think tank promoting It wants you to believe that this is really for you and your health.

It just promises to be cheaper for them.

And, while we are on this topic, I’ll tell you what they won’t. The concept of true fee-for-service isn’t bad. It has actually done more for our civilization’s economic prosperity than anything else. It’s what drives productivity. It’s not the devil they say you should fear.

A fixed fee for each medical service is the health culture for Walgreens, CVS, Walmart, telemedicine, and the like. Why is it so atrocious to pay physicians this way?

In fact, do you really think America’s alternative payment model will uncover a quality-driven healthcare utopia previously overlooked by the rest of the world?

It seems more likely that It will become the antithesis of productivity, while true accountability will still await a market where you get what you pay for… and, yes, this works best when supply and demand determine a cost.

THE BAIT AND SWITCH

One of my patients recently received a letter in the mail. The letter said her insurance plan was changing. “Not to worry,” the letter said, “you are being enrolled in an ACO.”

It was going to take care of her.

It was sneaking in.

It was poking at her choice in medical care.

And, the letter actually told her this was a good thing.

Imagine you own a boat manufacturing company. Your job is to build boats you hope people will never use or enjoy. What a fun job, right? In fact, you actually make more money if you sell a boat that stays docked.

The quality of the boat you build is determined solely from certain specifications established by the Federal Boat Bureaucracy (FBB), who incidentally, has never driven a boat.

Your arrangement with the FBB causes a number of oddities to exist within the boating market. For one, despite the fact that you are in the business of making boats for people, your appeal isn’t really to the people who use them at all.

You don’t need to spend time visiting with your customers and learning their needs. You aren’t customizing boats for them. You hope the cheapest thing that floats will do!

Instead, your real job is to build a boat that “looks good” to the FBB. Attend a few of their seminars. Learn how to manipulate a few of their valued variables. Check a few of their boxes, and you’ve done your job well.

Ultimately, whether it’s boats or healthcare, or you’re a boating manufacturer or running an ACO, it doesn’t really matter. There is now just one lake in town.

As for the few yachts sailing there?

You know them well. They are your own.

NOTE: Special thanks to Margalit Gur-Arie for her excellent article, The Death of Fee-for-Service in Healthcare, which served as inspiration for this post.
share+