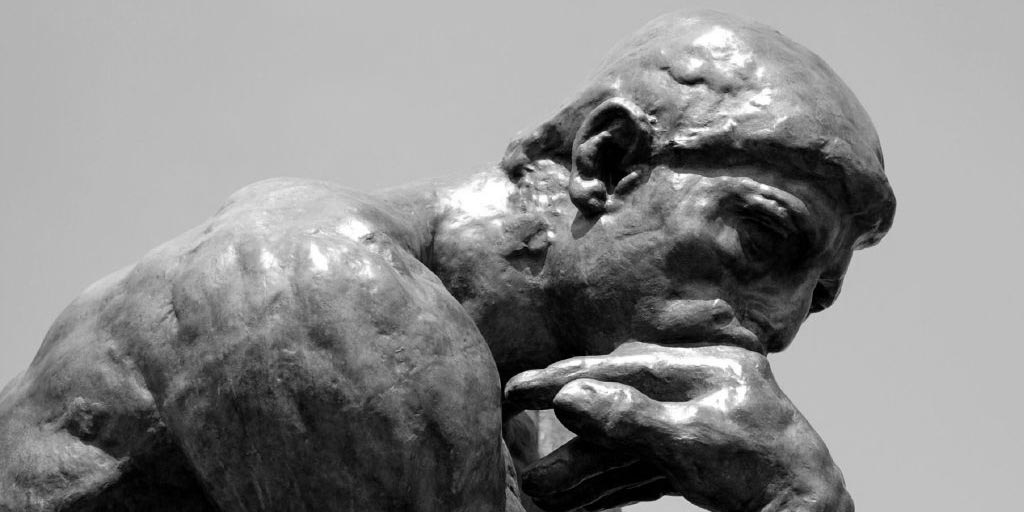 So begins one of my favorite quotes by Ralph Waldo Emerson. One that will have more meaning shortly. I’ll explain.

The American College of Cardiology (ACC), a medical society of which I’m a member, has launched a new website. It claims to be able to help you select the best hospital for your heart condition.

There are often several options to choose from when deciding the best hospitals to receive care for a heart (cardiac) condition… You can make more informed choices.    –From FindYourHeartaHome.org

Since numerous organizations with almost no knowledge about healthcare delivery have decided to release medical scoring systems under the premise that it will help the public in some way, why shouldn’t the ACC get involved? Great idea. Most of ACC’s members are physicians who will know a thing or two about patient care.

So, I quickly navigated to their new website to see what it was all about.

I typed in a Zip Code and hit the search bar. A few hospitals popped up. I selected one that I could potentially visit, a hospital that I knew well.

The first thing I saw was its address. It was listed as a PO Box number. Okay. Probably mailing them a letter would be the least of my worries as I searched for their physical address in the middle of the night with chest pain. But, I moved on.

I didn’t see any of this hospital’s scores immediately. Where was all the info a patient might need to make an informed choice?

I did find a list of cardiovascular services presumably offered at the hospital. I recognized that it was incomplete. It actually missed several important items.

One service not listed for this hospital was “Acute Myocardial Infarction Treatment.” This means that a hospital treats heart attacks. I knew this hospital did. The hospital actually had the fastest door-to-balloon (D2B) time in the area for years.

Don’t worry about learning more medical acronyms, but D2B just relates to how quickly a hospital team treats certain heart attacks. This hospital was quick at doing that. You might think it would be a place where you would want to go. Reviewing the ACC website would have messed you up.

A few other service lines this hospital provided weren’t correctly mentioned either. But, I ignored this obvious issue for now. I was looking for scores. What was this hospital’s grade?

I finally saw a link to the hospital’s “Profile” page. Maybe this was where the good stuff was located. I clicked on it. Up came another list. It looked something like this:

ACTION Registry-GWTG. Does not perform services.

I wondered if any patient in the world knows what any of that stuff means. I’m not even certain the majority of ACC’s members do. But, I’m fairly certain its members are aware of the quality of data (or lack thereof) being submitted to those registries.

But, again, where was the stuff that would actually be meaningful for real patients? A hospital’s participation in a registry doesn’t mean anything to them. I even asked a few just to be sure. They all looked glossy-eyed and bored to lifelessness with my question.

I turned my attention back to the website. I was still looking for anything that resembled a hospital quality score. I couldn’t find it.

I went back to the main page. Then, in the bottom right corner, I saw some hope: Download a “list of metric performance data for all hospitals.” Eureka! I found it!

I clicked the link immediately. A file appeared on my desktop. I opened it. Here’s what I saw on my screen: 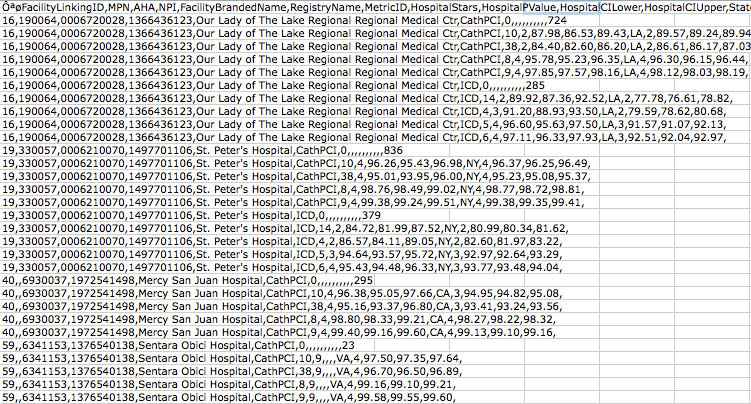 You just can’t make this stuff up. What the freak is that?

I’ll tell you what it is. As respectfully as I can. It’s unhelpful.

It is another think tank idea imagined by intelligent human beings who have seemingly failed to recognize the most important business concept of all: implementation.

Mark Cuban said it best, “Most people think it’s all about the idea. It’s not.”

You must be able to execute on the idea.

I returned one last time to the website. Ultimately, I figured out a way to search for multiple hospitals, and by selecting one facility at a time, I was able to group them together for comparison.

Since apparently it’s the most important thing for patients to know, the number of ACC registries that each hospital participated in once again flashed on the screen. I scrolled further down and finally found a few dedicated spaces for real numbers. At last, I was ready for the scores.

I looked at a row labeled “Number of PCI/angioplasty procedures performed during the calendar year.” Basically, how many of a particular heart procedure each hospital performed.

The space was blank for all three hospitals I was comparing. And, each of these facilities perform hundreds and hundreds of these procedures annually.

I looked at the next row labeled “Use of Aspirin to reduce the chance of blood clots after PCI/angioplasty.” It was also completely empty.

Almost saddened now–my internal laughter having completely subsided–I closed my browser window. Maybe, this was still a good start, I tried to talk myself into believing. Something we can build upon.

But, then, I remembered what I had just seen, and the inherent problems with this approach to quality. In fact, organizations have repeatedly demonstrated this to me time and time again. Poor data collection. Confusion on what is being collected. Variations in its interpretation. A clear lack of implementation.

That last row, labeled “Aspirin to reduce the chance of blood clots,” remained in my head.

I imagined an almost fantasy-like scenario where a listed score was actually accurate. I wondered what I would do if I were a patient and one hospital gave aspirin with four-star success and the other with five. Would I wish to alter the course of the ambulance transporting me to one facility or another? Would it matter? Should I carry a printout of this aspirin statement in my wallet to remind the doctors what therapy could be needed?

I’m not certain about my answers to these questions. But, every day I witness more deep seated problems with the current direction we are headed in American medicine. Patients aren’t pleased. Caregivers are frustrated. The government has moved in. Physicians are moving out.

We seem hellbent on providing less care, under the disguise of better quality, when the real goal is to just cut costs. Yet, each new policy from central authority appears to push us further away from that goal by merely adding one more layer of entanglement.

Maybe, we are operating on assumptions that need revisiting.

Maybe, spending billions to report pseudo-quality so it can be tied to payment is one of them.

To know even one life has breathed easier because you have lived. This is to have succeeded, says Emerson.

I think that sums it up.