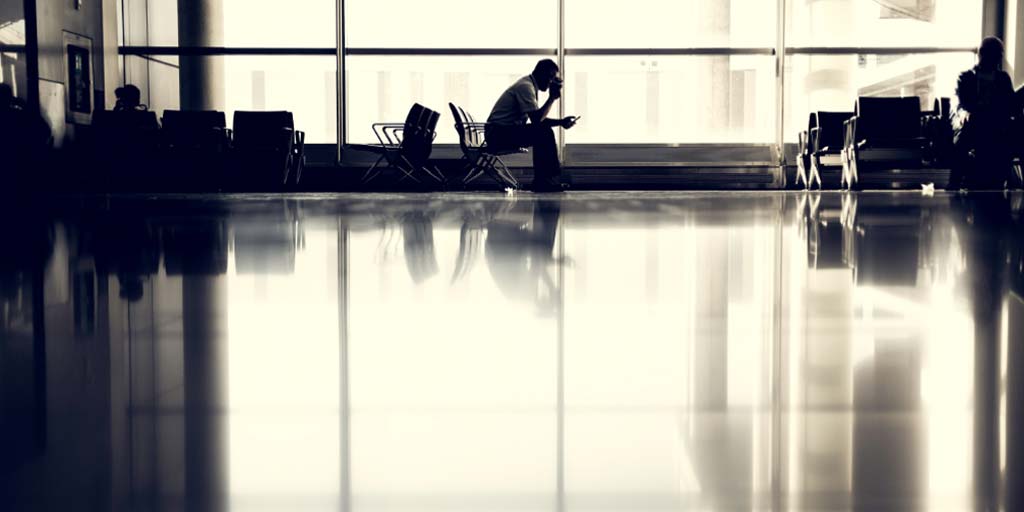 My wife and I booked the early flight. It was the only one available for our destination on that day. We left our house around 4 AM, driving by car. The airport is about 80 minutes away.

12 miles down the road, we realized we had both sets of car keys in our pockets. One set was supposed to have been left on the kitchen table, so extended family could drive our kids to activities while we were away.

We quickly turned around. We drove back home. False start. Then, we were off again.

I won’t recap all the ensuing details, but I’ll mention a few.

The airline’s online check-in process failed. The same thing occurred at the airport kiosk. We were re-directed to the “line” at the ticket counter you never want to be in.

There was a single worker at the counter. Everyone in front of us had a “story” that had to be sorted through. I did too. That’s why I was in that line.

I was born with four names on my birth certificate. My travel itinerary had been booked by a third party using my middle name. My passport contained all my names, but the airlines didn’t like my middle name being listed first on the itinerary.

“What time is your flight?” each worker would ask, as we moved up the chain of managers hoping to stumble upon someone who could help us.

Finally, I was handed a boarding pass. My middle name, however, was still listed first.

“I don’t think TSA will let you get through the security line, but you might as well see what happens,” said the ticket-counter worker.

“If they won’t let you through, just come back here, and we will go through the hassle and expense of rebooking everything for another day.”

Get out of this line.

Wait in another line.

Then, come back to this line.

I had all kinds of identification in my wallet. I flipped through my passport, drivers license, insurance cards, and credit cards. Of course, each one had a slightly different representation of my four names on it. Either I was who I claimed to be, or a fraud with a bunch of IDs.

TSA would have to decide.

I sprinted to the airport security line. The line was formed around those things that make you weave back and forth. But, I couldn’t even get to those things. The line was so long it just overflowed into the terminal corridor. People were lying on their luggage resting, because it was moving so slow.

Someone tipped us off that another security line on the other side of the terminal entrance might be shorter. We sprinted there. But, still, we waited.

We finally got to the front of the line.

I walked up to the TSA agent, boarding pass and passport in hand. I feared my rapid heart rate would somehow be detected and render me further suspicious.

The agent looked at my paperwork and made some marks on my boarding pass.

There was a long pause.

Now exhausted, I would have collapsed there, if not for the fact that I still had to get to my gate!

My wife and I whipped off our belts and shoes, put our luggage on the conveyer belt, and got through the full-body scanner.  Moving at lightening speed we began our sprint to the gate, bags in hand. I’m a jogger, so my wife told me to go on ahead.

“See if you can get there in time,” she said.

Of course, our gate was the last one. I realize it always is for these type of stories, but seriously, it was at the furthest possible end. So, I ran faster.

Sprinting up to the gate, an airline employee appeared to be waiting on me. “You made it just in time,” she said.

Almost irritated, the employee looked at her watch. Then, back at me. No smile was on her face.

“She has two minutes.”

I turned my vision back toward the long corridor. I had done all I could. It was up to my wife now.

It was like being the third runner of a 4 X 100 track relay team. I had metaphorically passed the baton to my wife on the anchor leg. My wife’s performance on the straight away would decide our fate.

Moments later, weaving through the crowd, I saw her. She was running equally as fast now. She was going to make it.

After boarding the plane, I wiped the perspiration from my forehead, reflecting on the events of my morning. I started thinking about medicine’s landmark clinical trials. How they enroll people. How they exclude people.

Usually this information is summarized in a chart on the first few pages of the publication. Usually 15 or 20 different baseline variables are listed.

This concept is critical to the integrity of a study. Whenever a variable or two is not the same between groups at the start of the trial, the authors will mention how this difference may have altered the trial’s conclusion in some way.

The problem, of course, is that we aren’t Apples.

I will eat this today. You will eat that. I’ll eat something different tomorrow. I’ll drive here. You’ll drive there.

I’ll forget to leave the keys in the kitchen. I will U-turn. I’ll race to catch my flight. I’ll get in this security line. Then, I’ll U-turn again. I will collide with a slew of unhelpful people, before finally running into an angelic TSA agent capable of helping me, become me, once again!

I enjoy the idea of clinical trials and the concept of learning more about the miraculous human body. I chose my occupation, in part, to dissect this type of collected data. But, our best organized trials are merely a guess thrown in reality’s direction. There are just an infinite number of current and future variables for which we will never be able to control.

When was the last time (and I’m speaking to my physician colleagues here) you saw a baseline characteristic in a clinical study outlining the dietary preferences of its participants? Vegetarian or Vegan or Mediterranean? How often do you see us control for the number of steps people take in a day? How about the number of stressful trips trial participants make to the airport?

While a few of these items may have been used as therapy X or therapy Y in some clinical trial somewhere, none of them are routinely controlled for when studying the potential benefits of an unrelated medicine or procedure. Yet, almost nobody doubts their potential influences on our health.

You see, in many ways, when it comes to clinical trials, we just guess.

In order to make conclusions.

Which we hope are good.

Which we do, some of the time.

But, there’s still so much uncertainty.

And, in the face of it, you need judgement.

When the identification of the real problem is just a bit off, when the line to more relaxing times seems too long to be waited, you will need someone to get you to safer places.

Sure, statisticians will tell you that by randomizing treatments to groups (a common standard for trials) you will control for these things. Fine. Then, go fill up two buckets of Apples from a pile of infinite variability, and I’ll show you two buckets of Apples that aren’t precisely alike.

Yet, this has become our focus in medicine. Government dollars pushing for more Apples to be treated just the same.

But, this approach falls short, because IQ is always dwarfed by judgment.

Apples verses apples is really a theoretical construct. Uncertainty is the only absolute. And, yes, in the midst of it, you need a good Doctor. Or maybe, you just need a friend.

Imagine if the two were one in the same.