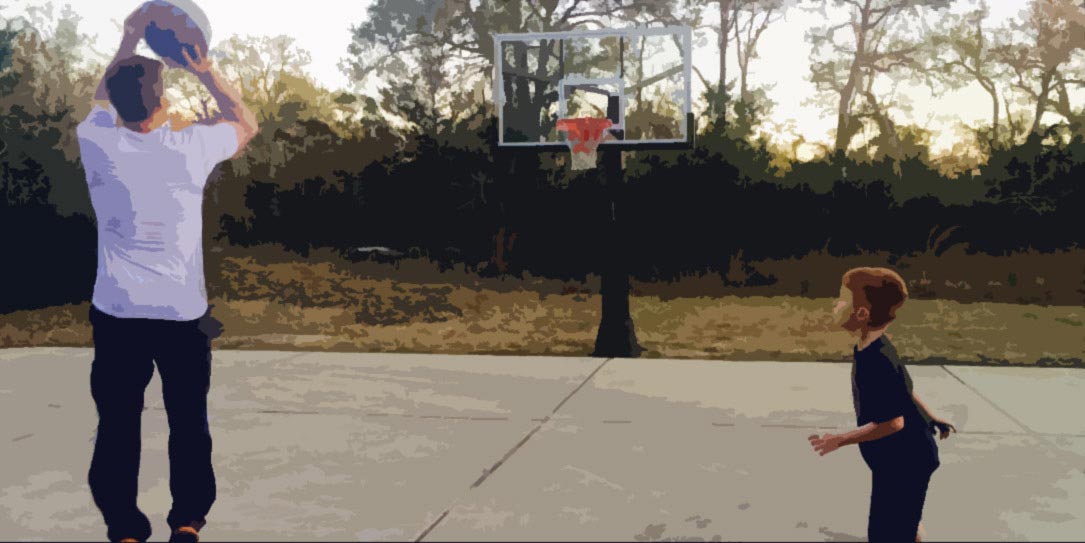 When March Madness gets to be too much–when too many commentators impair your watching and too much swagger overshadows the coaching–turn off your television. Head outside with your first grader. Bring a basketball. Find a goal. You’ll absorb more life lessons in twenty minutes shooting baskets with your son than you’ll get in the next twenty years at your job. Give it a try. A few buckets. You won’t regret it.

For whatever reason, my son prefers me to shoot the ball. I’m eighteen feet out from the rim at the top of the key. I haven’t played organized basketball in two decades. But, I’m “Daddy,” and I guess that’s all that matters. I’m the best player he’s ever known. Believing is the first chapter in the book of greatness.

I can do this. Actually, I probably can’t, but I secretly know it won’t even be necessary. I’ve played this game before, and my son only counts the shots that I make. My other attempts are just an illusion, blocked out from his recorded memory. Therefore, I will only need to make twenty total shots. And, to my son, these twenty will always be “in a row.” We must always strive to see the best in each other.

I hit the first one. I jog down and touch the baseline under the goal, then return to the top of the key where I wait for another pass from my son. I have no idea why I did that ridiculous charade. It must be something engrained in my memory. Some drill I must have performed a million times in a previous lifetime. After every shot, I repeat the routine. Back-and-forth. Shot after shot. The secret of my future is hidden in my daily routine. –M. Murdock

I must have miscounted, my fault. I was just trying to finish before dark. Three things cannot be long hidden: the sun, the moon, and the truth. –Buddha

My son tells me this only because I’ve told him the same thing a hundred times. Strength for the long shot comes from the legs. The truth is that my legs feel like jelly after running back-and-forth, firing shot after shot. But, as my son already mentioned, it’s when your legs are tired that you need them the most. Give the unforgiving minute sixty-seconds worth of distant run. –R. Kipling

Lesson #6: “Just ten more baskets to make, Daddy. That’s not too many; it’s really just five and then another five.”

Good point. Ten sounds like a triathlon still to go. I might never get there. But five, I can do that. It’s a doable number. I’ll focus on the five for now. When the goal is out of reach, move the target closer.

Lesson #7: “Daddy, you probably should practice more if you want to make more shots.”

I’m smiling now, because I’ve said this to him before too. Tomorrow’s victory is today’s practice. –C. Bradford

Lesson #8: “Daddy, you forgot to run under the goal and then back up here before shooting the ball.”

I was getting tired, so I only went halfway the last time. I only did it once. Better to live like someone is always watching, because someone always is.

Lesson #9: “Daddy, Mommy usually makes all her shots from there.”

My mistake. I’m the second best basketball player my son has ever known. Who can compete with Mommy these days? Everyone I meet is in some way my superior. –R. Emerson

Lesson #10: “Daddy, you didn’t jump when you shot the ball that time.”

Success is an interesting character, much like an insatiable cup. You can “add one” to every number you create. If you wait for the cup to be filled before you drink, you’ll remain forever thirsty. Make your twenty. Make your thirty. But, don’t forget to take a drink from the cup every day. Relish the ride. It’s remarkable even in the midst of the Madness.