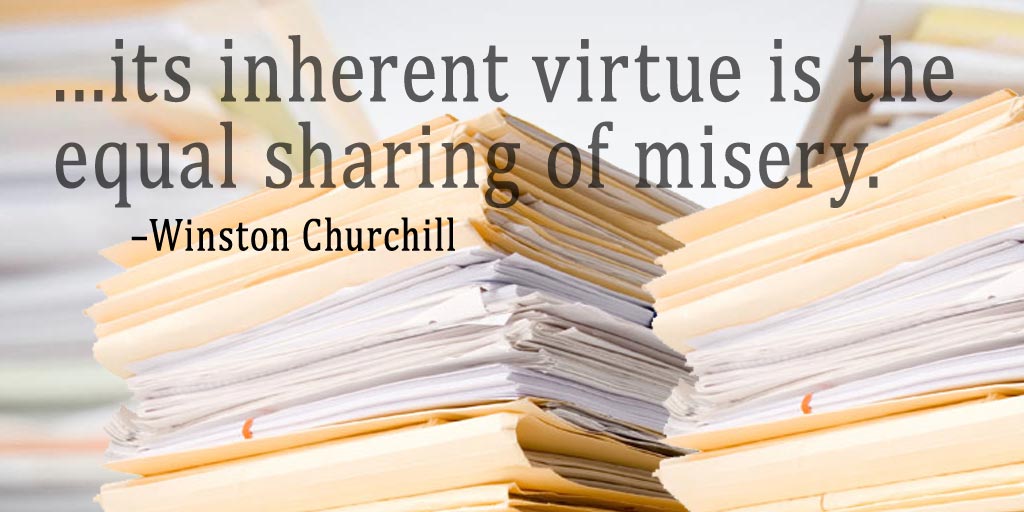 You could actually argue that the government is causing the problem.

Say what? How can that be?

By handing out patents.

You see, it’s the U.S. Patent & Trademark Office that gives the drug company a “monopoly” on their product for a very long time. This “monopoly” effectively kills the market benefits of cost control.

But, I know what you are thinking.

We need patent regulation to drive innovation, right? We need to protect people’s ideas from being pirated so people will stay motivated and keep inventing things. Patent regulations are surely required for progress, right?

Well, I’m not here to disappoint you. But, if you believe that, you just might be saddened if I shared with you all the data that refutes that train of thought. However, I’m not here to sell you on the fact that patents are bad. I just want you to think about something from a different perspective.

I want you to understand how one (perhaps even well-intended) regulation, can lead to the presumed need for another regulation, which can result in the necessity of yet another, until we are so bogged down with overregulation that we have entirely defeated the purpose of our original intention.

And, this my friends, sums up America’s entire healthcare system.

We need to regulate the providers of medicine. We can do this because there are plenty of physician apostles supportive of “evidence-based medicine.” Besides, this is an easy concept to sell.

“Just do what the evidence says to do.”

And, physician medical societies will actually help us in our quest to regulate the doctors. They have already shown a love affair with publishing “guideline” statements. In the words of a skeptical physician mentor of mine, “Yes, we have plenty of opinionated old people sitting around thinking stuff up.”

Now, don’t miss my point. Medical guidelines by themselves aren’t bad things. They are suggestions for when you don’t know what you should be doing. But, it just seems naive to say that the people writing them had no clue guidelines would become governmental “laws” for “quality” assessment in our world of healthcare overregulation.

In fact, everyone is making up their own guideline statements for medicine these days, including healthcare retailers and insurance companies.

Suddenly, the entities writing the guidelines are perhaps more relevant than the materials contained within them.

And then, the big one.

Let’s merge a few idealistic concepts that you can get almost everyone to support, like preventing insurance companies from denying coverage for preexisting conditions, into over 20,000 pages of codified regulations. We’ll even call it the Patient Protection and Affordable Care Act.

And, it will protect our well-being while lowering costs.

We need to regulate the computer systems used for healthcare. Because, if left up to natural rules of progress, the healthcare industry might never decide to use them. So, we will sign into law the Health Information Technology for Economic and Clinical Health Act (HITECH). This will incentivize the use of electronic health record (EHR) systems that only we have certified.

Rather ironically, in the three years prior to the enactment of HITECH, the percentage of office-based physicians with EHR systems increased by 65%. In the first three years following HITECH, use of EHR systems continued to rise, but with a less robust relative increase of 49%.

In many ways, HITECH paid an absurd ticket price to hop onboard an already moving train. Then, arguably, it steered everything in the wrong direction by contributing billions of dollars to the purchase of proprietary EHR systems. Proprietary systems that use patented software.

You see, our current EHR failure is made up of one regulated system after another that fails to communicate with each other. Like trying to build a magnificent Tower of Babel for healthcare with construction crews that speak different languages.

History has already shown us how that works out.

It’s now quite obvious to those on the front lines of patient care that overregulation is actually impairing our ability to heal the sick, help the needy, and improve well-being. Unprecedented frustration currently abounds.

Interestingly, when healthcare was less regulated, the Mayo Clinic gave away 30% of its medical care for free. Now, that number is less than 0.5%. Have excessive regulations even made us less generous?

“There are two options,” wrote a commentator to one of my recent blog posts. “(1) A tax-funded single payer system; or (2) everybody individually paying cash for medical care.” This person voted for option 1.

Of course, there’s more than two options, but I get what he is saying.

“I can’t pay cash [in our current system] for healthcare, so someone else should pay it for me.”

But, here’s the problem with this line of thinking.

Eventually, we will run out of someone else’s money.

And, I agree, up until the point we erroneously nod along to comments like “the government needs to regulate it more.”

The truth is that the government is regulating it now. And, as Steven Brill has already outlined, it’s doing so by using all the lobbying dollars from pharmaceutical corporations, insurance companies, and hospital associations. It actually seems that the government and the healthcare business have become one in the same.

If that’s true, more regulations won’t solve the crisis. It will only make it worse.

The dramatic irony is that I’d be using a computer software system in my medical practice today with or without any ongoing initiative by our government to takeover healthcare. I’d be using one even without the existence of government-issued patents.

In fact, our entire computer software industry, arguably one of the most innovative of all time, was completely born without the hint of patent protection. Long before Amazon, almost humorously, was able to patent the “one-click” for online purchasing, long before the 1994 Federal Circuit Court ruling In re Alappat made that possible, long before our current system of intellectual monopoly existed, and long before overregulation was commonplace, progress within the software industry was exploding.

One might even argue that Microsoft’s own creativity plummeted with subsequent software development as they began to focus more on the legal aspects of their own patent protection. (A few of their Windows operating systems and a web browser start to come to mind.)

Even now, open-source software, which is software released under a license practically the opposite of copyright, software that anyone can add to and freely distribute, still remains the major driving force behind the innovative world wide web. Most servers, internet databases, and major coding languages, including the ones used for my own blog, are all based upon open-source projects.

It actually seems that government regulation is not the cause of innovation but rather an unwelcome consequence of it. In fact, one might speculate how exciting and efficient my office-based EHR computer system would be today with no government intrusion at all.

But, friends, every bit of that is a mute point because we’ve gotten mixed up. We have come to believe that more regulation will get us to where we want to go more quickly and cheaper. So, we truck onward, seemingly headed off the cliff of wasteful spending.

Maybe, however, there’s still hope for us here in Columbus’s New World. As we continue to sail toward more and more regulation in healthcare, maybe we won’t fall off the flat earth after all. Perhaps, we will reach the other side and finally see more clearly that the answer for healthcare is really less.