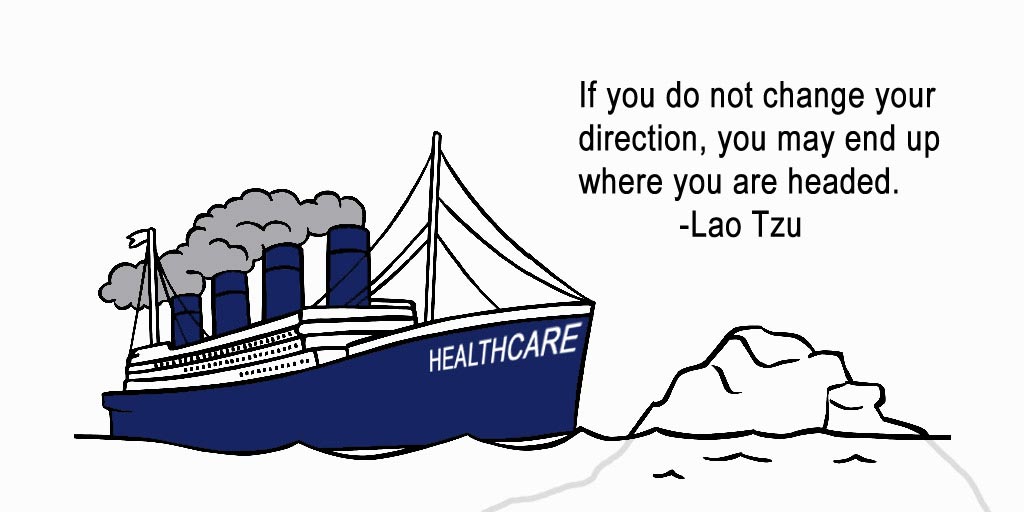 This is important to you. Trust me.

If you’re young at heart, it matters because it’s your tax dollars this April. If you’re wiser in years, it directly affects your health and the system you’ve been pumping money into for decades. This is the same medical system that you thought would take care of you later in life. Again, this is about your money and your health, so read on.

Government-funded health insurance in the United States is administered by the Centers for Medicare and Medicaid Services (CMS). And, you need to know that CMS is on a mission. They are going to change how healthcare gets delivered unless someone like you cares a whole awful lot.

I call CMS’s mission a blindfolded one, only because they seem to have no clue where they are taking us. Their mission is to have 85% of payments made to medical providers linked to clinical quality measures within the next two years. Incentives will be weighted almost entirely toward quality of care (as determined by CMS) instead of volume of care. I’m not certain if you currently have any problems getting in to see your doctor in a timely manner, but just wait until there is less incentive for you to be worked-in at all. Especially, if you are really sick. In fact, if you are too sick, you just might damage your doctor’s “quality” numbers, which will further create problems with your access to care.

But, wait a second. Paying for “quality” medical care instead of volume seems to be a no-brainer idea, right? Everyone wants quality, so you can get plenty of folks to go along with that concept. In fact, we already have. And, it’s the main reason the entire U.S. healthcare system is now treading in quicksand.

It’s like the captain who thought his Titanic could cut through the ice. And, yes, we are sinking now.

Sure, we can move a few chairs around on the deck. We can tweak a few meaningless things. But, there is no longer an actual solution that involves staying onboard. The boat is going down. The time has come for an exit strategy. Abandon the ship.

Doctors are giving up. Some are committing suicide. And, that’s not a laughing matter.

But, CMS measuring quality in healthcare? That’s as laughable as it gets.

In fact, in actual practice, I believe it may be the single most ridiculous idea that I’ve ever seen implemented in medicine.

CMS can’t measure quality. They’ve been trying. And, they’ve clearly established that they are terrible at it. The game is in the ninth inning, and CMS is losing by a landslide. Frankly, the ten-run rule should have been enacted a long time ago.

Sure, you can count how many times I wash my hands during the day and give me a score. But, you can’t measure variables you can’t even grasp. And, that’s the art of medicine.

I saw a patient from southeast Asia today. He works at a local donut shop. Doesn’t speak any English. He’s younger than me but has had 17 dying spells in the last month. He has a device implanted in his chest (called a defibrillator) that delivers life-saving shocks whenever he has a potentially fatal heart rhythm. He’s been getting shocks every other day for several weeks now. Each shock feels like getting kicked in the chest by a horse.

I’m the first doctor he’s seen in a year. As it turns out, I suspect he has a heart rhythm condition named after a couple brothers with the last name, Brugada. This seems to be the first time he’s ever been told of this possible condition. I run a few office tests and check the micro-chip within his implanted device. I piece together a confusing web of clinical data, communicating with him via hand gestures, drawings, and the patient’s friend acting as an interpreter.

I discuss his care with a specialist colleague. I order some blood work and then call the lab myself to negotiate a cash price because my patient has limited funding. I even provide him a “patient education” handout. It’s nothing like the wordy nonsense that CMS requires me to do to meet meaningful use of my electronic medical record. It’s actually something useful. I hand draw a map explaining to my patient how to get from the donut shop to the lab to have his blood drawn.

So, how did I do regarding “quality” today? My own assessment is that I just did my job. But, what score might CMS give me? Well, so far, I’ve got a zero, because I haven’t had time to document ANY of it. In fact, CMS seems more interested in me documenting patient care than adding value to it.

I probably should have gotten my patient to fill out a patient satisfaction survey. Maybe, CMS has one in my patient’s native language. I can even see CMS funding a billion dollar grant that evaluates taping wires to my head to measure how many brain cells fired while formulating my treatment plan.

How many times do I have to say it? You really think every patient fits in an understandable and simplistic algorithm for quality scoring? You can’t objectively measure the value that I provided on this case or any of the other two dozen patient encounters like it that I’ve already had today. But, CMS is in blind pursuit of some formula that can.

CMS has wasted billions of your tax dollars already and they will waste billions more unless you stop them. And, here’s the summary of what they’ve come up with to date: have providers spend as much time as possible documenting patent care, because this provides fantastic value. Nonsense. The efficiency here is next to nothing. Patients get almost no value waiting for me to document what I’ve already done just so some billing department can process claims.

I literally spent 55 minutes today evaluating my patient. And, if I want to be paid appropriately, I will spend another 25 minutes getting my electronic medical record to explain the things that I did. And, if I can’t find a checkbox in my system to explain it, I don’t get credit. This is absurd.

If you are a physician who has ever gone on a medical mission trip, you’ll get what I’m saying. You see a patient. You diagnose the issue and implement a treatment strategy. Then, you turn around, looking for some computer to type on, or some phone to dictate a bloated billing message. Then, it occurs to you. You don’t have to do this. You just turn back around and provide care for the next patient. Because, you are a doctor, and imagine that, you just get to practice medicine for once.

Think about it. You have a cut on your leg. And, I give you a medicine to make it better. But, the cut doesn’t get better. Did I give you the wrong medicine? Or, is it more complicated than that? Maybe it doesn’t heal because you keep picking at it. Maybe it’s not my fault at all. How do you measure all of that? How do you decide if what I did was an error or if what happened was just a known complication from time to time? Maybe, you’ll even get better despite this error or complication. Explain all of that with a formula.

This is why we are on the Titanic. CMS is trying to measure things it doesn’t understand and can’t even define from up in an ivory tower. They just don’t get it. I’ve always strived to be my best. I spent 15 years of training beyond high school preparing myself to do just that. I want to provide quality. In fact, I live to provide real quality for all my patients. You can’t encapsulate the quality that I provide using a scoring system that’s built around the premise of hiring more people to check more of the right boxes for me. This bizarre model is actually hindering medicine by slowing me down and impairing much of the value that I can provide.

It’s especially time to stop wasting our tax payer dollars on this kind of futility. Allow qualified people to train great people to be fantastic doctors. And, then, let them practice medicine.

It’s like the story about the man on an island with a doctor, lawyer, politician, and insurance salesman. The man gets sick and ultimately realizes who he wants caring for him.

It’s time we all decide. Because when the Titanic goes down, we’ll be fortunate if there’s still an island for us to swim too. And, if you want a doctor on that island to care for you when you’re sick, you better start listening to him now. If you want a person still motivated to work-in even the most sickly patient for a much needed visit, then listen to what that physician is telling you now. He’s telling you how to fix the system. You fix it by getting CMS out of measuring the quality within it.

Remember what Lao Tzu once said: “If you do not change your direction, you may end up where you are headed.” And, friends, we’re on the Titanic.