To be Great is to be Misunderstood 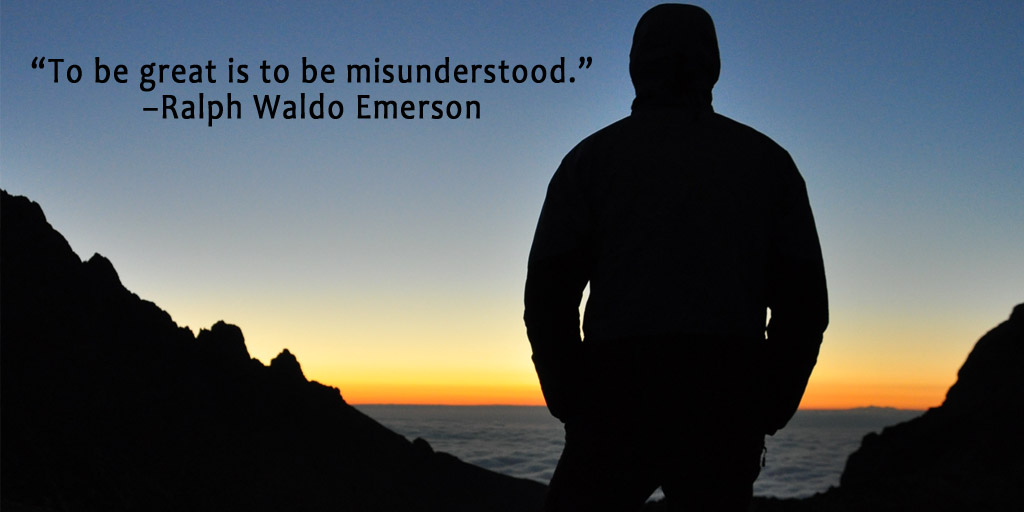 In this post, I examine the firestorm surrounding Dr. Lisa Rosenbaum’s article, N-of-1 Policymaking — Tragedy, Trade-offs, and the Demise of Morcellation, which was published in the New England Journal of Medicine in March 2016. To appease the medical pious everywhere, I disclose that I have never met Dr. Rosenbaum in person. I do follow her on twitter @LisaRosenbaum17. I have no financial stake in power morcellation, a medical procedure that I will discuss below. And, yes, I dislike bullies.

They just sit there. They read stuff. They watch news stories.

They may very well be engaged with a topic. But, they will infrequently write reviews or give comments. That kind of stuff usually always comes from the extremes. And, as you know, the extremists either love you or they hate you.

Dr. Lisa Rosenbaum got the extremists juiced up earlier this month by writing an article about the tradeoffs and demise of a medical procedure known as power morcellation. If you’re a normal person that happens to run in my professional circle and have been following this saga, I suspect that you have moved on. That’s what normal people do with non-stories.

If, however, you are an extremist, you continue to write about it. That’s me.

Dr. Rosenbaum’s article was published in the esteemed New England Journal of Medicine. It’s purpose was to call attention to the fact that we often make regulatory decisions in medicine based upon emotional factors and not just scientific ones.

Laparoscopic power morcellation is a less-invasive procedure women can undergo for surgical treatment of uterine fibroids. Previously, it was readily available. That changed a few years ago following a high-profile case that is still tied up in litigation. The case involved a woman (an anesthesiologist by profession) who underwent power morcellation for alleged non-cancerous uterine fibroids. Shortly thereafter, this woman was diagnosed with a rare aggressive cancer (stage IV leiomyosarcoma).

I say alleged in this situation only because I’ve become confused about (more on this below) what I’m even allowed to know about this high-profile case which has received so much media attention.

Here, however, appear to be the facts:

1. A woman who underwent power morcellation was diagnosed with stage IV cancer.

2. The woman and her husband (also a physician) subsequently launched a campaign to ban morcellators.

3. In November 2014, the U.S. Food and Drug Administration (FDA) issued a Safety Communication about power morcellators, adding a black-box warning and contraindicating their use in essentially all women.

4. The FDA’s decision was based upon their own interpretation of data suggesting a less than 1% chance (0.29%) for power morcellation to spread an unsuspecting cancer.

5. Only one sentence in the FDA’s Safety Communication alluded to potential benefits of the less-invasive laparoscopic morecellation procedure–benefits that would apply to the majority of women undergoing the procedure and include less pain and blood loss, faster recovery, smaller surgical scars, fewer venous thromboembolisms, and less surgical-site infections.

Ultimately, it is the latter two points that make Dr. Rosenbaum’s article so relevant.

THE FOOD AND DRUG ADMINISTRATION

We live in a world full of healthcare policy making. We struggle to decide what policies need to be made and who should be in charge of making them. One of the strongest influencers is our Food and Drug Administration (FDA). In fact, in most circumstances, the FDA is the only real decision maker.

Is this a good thing?

Most of us blindly presume that it is. But, is the FDA really protecting us? Or does its existence merely result in tradeoffs that actually lead to greater overall harm?

Friends, these are rational questions.

And, they both matter.

For example, let’s say someone suddenly prohibited you from using all modern medical products out of fear they might cause something bad to happen to you. In this scenario, use risk might become undetectable, but prohibition risk would be so outlandish you would incur obvious harms.

Said another way, if you were truly suffering from a serious disease, would you prefer that you and your doctor be able to select a care plan from all available modalities, choosing the one that ultimately offered you the best combinations of benefits and risks? Or would you prefer being able to select from all medical goods except those that a lower-level government employee in Maryland has decided to withhold from you?

Friends, these are rational questions.

We also rarely think about the FDA regulator. What incentives might exist at that job? How does one further his or her career? By being the first to approve a new medicine? By playing to win, as we often say in sports? Or, instead, is there only reward in avoiding the rare disaster? By playing the often more harmful game not to lose by delaying and delaying and delaying again until “more research” is supposedly available?

We never presume the FDA is responsible for thousands of deaths that inevitably result from slowing and/or obstructing certain therapies to the market. Why not? In fact, Dr. William Wardell estimated more deaths in America resulted from delaying the approval of a single beta-blocker medication than occurred in the Korean and Vietnam Wars combined.

You should know there are hundreds of volumes of codified regulations for FDA processes. A new drug, on average, takes greater than 10 years and $1.4 billion to pass through this onerous bureaucracy. How much medical progress are we sacrificing from effectively preventing innovative small startup companies from entering this market due to financial constraints alone?

Friends, these are all rational questions. And, how the FDA actually makes its policy decisions is just another one!

But, the extremists in the morcellation story feel differently.

The campaigners against morcellation know, that because of the FDA’s most recent decision, the largest manufacturer of morcellators has pulled its product from the market. Many hospitals won’t even allow this procedure to be performed.

Yes, more regulations. But, are they protecting the liberties of the majority, or just a finite few?

These are rational questions brought to the forefront by Dr. Rosenbaum’s piece.

But, the campaigners against morcellation seem to be against this reasonable discussion. They appear adamant that no journalism be allowed to open Pandora’s box.

So, they came after Dr. Rosenbaum. On a technicality.

“Man is not troubled by events but rather how he interprets them.” –Epictetus

Interpreting written language has long since entertained us.

In the Biblical account of the Easter Story, there are a number of eye-witnesses. According to the Gospel of Mark, the women who come to Jesus’ tomb do so at the rising of the sun. In John’s Gospel, however, the single woman who arrives, Mary Magdalene, comes at dark.

Is there a discrepancy? Maybe, but maybe not. Perhaps Mark was merely speaking of their arrival, while John was referring to their departure. Scholars, of course, will pontificate about it, but either way, does the Gospel’s message really change?

In recent weeks, Dr. Rosenbaum’s own writing seems to have come under a similar type of interpretive scrutiny. Here is what she wrote in her article about the high-profile morcellation case:

“…a 40-year-old anesthesiologist and mother of six, underwent a hysterectomy with intraoperative morcellation for presumptively benign uterine fibroids at Boston’s Brigham and Women’s Hospital (where I have since joined the faculty). The masses turned out to contain foci of leiomyosarcoma (LMS), a rare, aggressive cancer that has a 5-year survival rate of 63% when diagnosed at stage I. Reed’s LMS was stage IV, so her likelihood of surviving 5 years was only about 14%.” (emphasis mine)

Her account begins with a patient undergoing morcellation for a presumed non-cancerous condition.

It concludes with the patient having stage IV cancer, the known stage of her disease reported on by the media.

In case you missed it, read it again, because that’s the entire firestorm.

So, the campaigners made such an accusation against Dr. Rosenbaum.

Never mind that an internal audit of hospital electronic records rendered this accusation to be false. A federal investigation, prompted by a complaint filed with a government agency, is still ongoing.

Of course, it would seem to most all of us that you must be sure someone has a cancer before you can tell the stage of it. Likewise, nobody rightfully performs morecellation on known cancer tissue anyway (stage IV or any other stage).

Dr. Rosenbaum’s article is about the tradeoffs of morcellation–the benefits of a less-invasive procedure against the potential risk for upstaging an unsuspected cancer. It would seemingly make no sense at all to use, as an example in her article, a patient whose cancer was already upstaged to the highest level before the procedure at question was performed.

I have spent extensive time reviewing this case. I will even admit that it took me awhile before I could figure out which side wanted what argument, about whatever stage, at what time, to be true. In fact, the “he-said-she-said” game got so bizarre at one point, the campaigners against morcellation even got another physician to make oddly placed comments about Dr. Rosenbaum:

“I just don’t see how anyone can argue with the fact that scrambling up a malignancy [with morcellation] within the peritoneal space is going to be an innocuous event,” this physician said, as if Dr. Rosenbaum, or anyone else for that matter, made such a claim.

Ultimately, the bulk of the hit piece against Dr. Rosenbaum should have ended when the evidence failed to support the campaigners’ claim that she inappropriately obtained privileged information from the medical record. But, as you might imagine, it didn’t stop there.

Because they said she was a journalist with an “agenda.” They called her writing “weak” and said it was that of “fascist” propaganda. They said it was “not authentically written” to promote progress.

Of course, the irony is that Dr. Rosenbaum’s article was making the case that we frequently base our own conclusions on emotions instead of facts.

The campaigners against morcellation… they just further proved her point.

In the News, Public Health