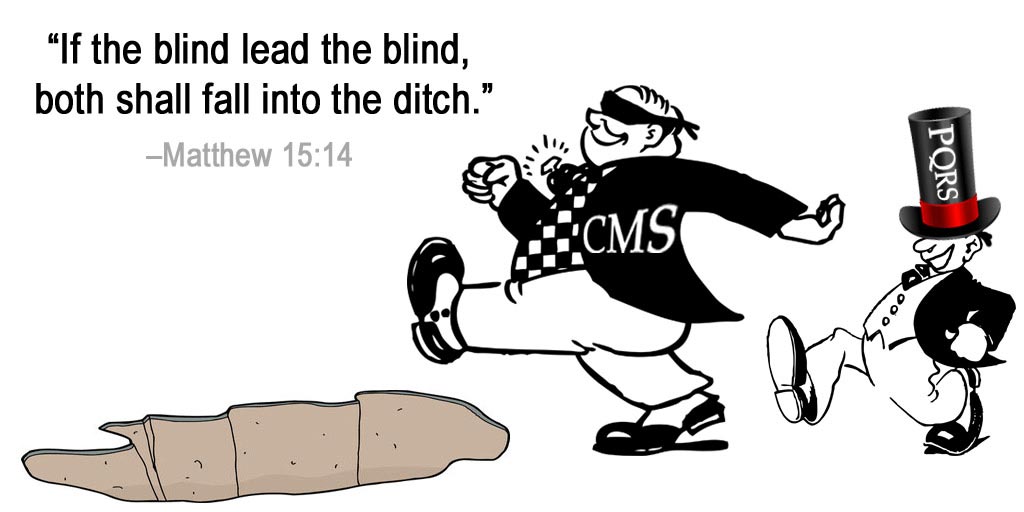 It has become perhaps the silliest four letters in healthcare: PQRS. It stands for Physician Quality Reporting System. It’s another this and another that created by the Centers for Medicare and Medicaid Services (CMS). After you read this, you’ll be like me, scratching your head trying to understand why anyone thinks our healthcare system is better under CMS’s leadership.

CMS has setup a thing called PQRS, so physicians across the country can submit data informing the government how well they are practicing medicine. I wish that I could ease your understanding of this acronym by just referring to it as “quality data,” but it no more represents quality than a coin flip. In fact, statistically, a coin flip is probably better. PQRS is like the fisherman explaining to the rancher the type of fish that he caught. Actually, it’s nothing like that. It’s more like the fisherman’s boat explaining to the rancher’s cow the very same thing. Basically, the rancher sums it up: “Ain’t nobody have a clue what’s really going on here.”

If, as Leonardo da Vinci once said, “simplicity is the utmost sophistication,” CMS is really as unsophisticated as it gets. No joke, there are 22 unique webpages at CMS.gov to teach physicians how to participate in PQRS. Most of the pages have up to a dozen more links to more pages so you can download more files of confusion. As a physician, if you don’t submit your PQRS data for 2014 by later this month, you will begin to receive a two percent reduction in your payments from CMS starting next year. I’m in the process of complying, but wiser physicians have already thrown in the towel.

In finance, they call this type of thing pay-to-play. Basically, to meet CMS’s requirements, my small medical practice paid an information technology team to come in after hours and install more software on our server. This server, which we purchased for approximately $40,000 over a year ago, runs our electronic medical record (EMR), a system whose annual fees for operation and maintenance equal nearly that same amount. After configuring my EMR to interact with this newly installed software, I outputted no less than 769 different files to a folder on my computer. The files have extensions that nearly everyone in the working world has never seen before, stuff like .gs5, .ogn, .twk, and .xml. But, that’s not the best part. Wait till you try to upload these files to CMS’s website! Remember, how well that Healthcare.gov site operated? This process is just as unbelievable.

The saddest thing, however, is actually not the inefficiency involved with getting to the dance. The elephant in the room is the fact that the dance is nothing more than a futile charade in the first place.

THE INACCURACY OF CMS DATA

The PQRS files that I’m outputting from my CMS-certified EMR aren’t even right. For example, some of the data claims that I failed to include in my charts any medications that my patients are taking. Say what? Every single visit note contains a patient medication list. Every one. I have no idea what the EMR is spitting out.

The irony is that there’s a box to check on the file uploading website attesting that the information I’m submitting is accurate to the best of my knowledge and ability. I’m not quite for sure how to respond to this box. Does CMS expect me to reprogram the software myself to make it right? The truth is that my data is likely just as accurate as all the other data we’re rapidly collecting through EMRs in medicine right now–which is another way of saying I’m fairly certain that it’s not the least bit accurate at all. Like the rancher said, “Ain’t nobody have a clue what’s really going on here.”

Medicine is both an art form and a science. But, the art form has almost completely become displaced in recent years by an over-reliance on poorly collected data. The problem isn’t just that CMS systems are unsophisticated and their data collection process is poor; nor is the bulk of the issue related to the fact that their PQRS quality metrics are outdated. All of these things are true, but the real problem is that CMS just doesn’t get what quality is even about in medicine. You see, if all the data being collected was infallible (and it’s not), it still wouldn’t give you an absolute representation of healthcare’s value.

I love many aspects of evidence-based medicine. This is what we call it when we gather information from widespread clinical trials to guide our management strategies. However, on any given day, you should know that more than half of the patients that I see would never be enrolled in a clinical trial. Why? There are many reasons, but in most instances, there are just too many complexities. Patients with “square-like” symptoms don’t always fit in “round-like” holes typically required for clinical studies.

For example, one of our landmark cardiology trials published last decade studied the optimal management strategy for patients with coronary artery disease. This is arguably the most common disease process that I manage on a daily basis. Of the 36,000 patients screened for this trial, less than 10% of that population actually met the trial’s enrollment criteria. In fact, only 6% of all patients screened ended up being a participant. Conclude whatever you want to from its results, but at best, you are merely gaining an understanding of how to treat the 6% of the population studied. What about the other 94%? How should those patients be managed? Previously, I would have told you to ask your doctor, but he or she just might be too tied up working as an information technology wizard for the government.

THE PROBLEM WITH CMS LEADING THE PARADE

You see, its burdensome things like PQRS that are causing physicians to get out of medicine. Think about any issues you may have had recently interacting with your doctor’s office. Wait times? Impersonal nature of your physician? Everyone too busy typing on a computer screen to look you in the face? Too much time spent filling out insurance paperwork and too little time left to visit with your doctor?

Don’t let me confuse you. The problem is not the digital world. In fact, I’m in hopes this will ultimately save us. But, most of the problems mentioned above, and then some, have arisen out of the over-regulated and under-innovative digital world CMS has been involved with building since 2009.

In that year, American tax payers funded billions of dollars for what technology entrepreneur Jonathan Bush has since referred to as “Cash for Clunkers” legislation. “[The bill] gave $30 billion,” Bush says, “to buy the very pre-internet systems that all of the doctors and hospitals had already looked at and rejected.” If you follow me around for one day, you’ll learn quickly what he is talking about.

Some people will disagree with me and claim that at least physicians have computers now, and we can start to tweak their systems. Hogwash. We need to rethink our paradigm. You can’t put a propeller plane into space no matter how much you tweak that thing.

The solution is for CMS to get out of measuring quality in medicine, and this clearly requires exiting the business of regulating healthcare technology systems. (I previously explained to you how much that’s hampering things.) CMS can even declare a victory in its own mind on the way out. Just anything to get them to leave the parade.

I get it. No one wants to hear physicians complain. But, I haven’t met one physician yet who wants to be complaining. We want to practice medicine that matters, not computer science, and this is coming from a physician who actually is a computer programmer!

The most concerning thing for all of us is that no one at CMS is even listing. Sure, their secretary of whomever is attending a few meetings and is making a few speeches. I’ve read all those. But, ultimately actions speak, and no drastic ones are coming. If you know any good ways to get CMS to listen, let me know. It would be nice if they could hear us before spending another billion dollars formulating conclusions about this meaningless PQRS data. You know what Everett Dirksen said: “A billion here, a billion there, and pretty soon you’re talking about real money.”